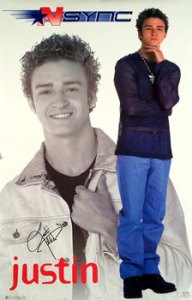 i’ve been admitting this all day: i want to marry or hold hands with justin timberlake. it might be a side effect of my illness. the director of the poetry center took it pretty hard. but during the grammy’s i downloaded “what goes around…/…comes around” and i’ve been listening to it over and over again trying to figure out how i could feel this way about a former member of n’sync.

listen to his falsetto. and the way he says “girl” and the way he rhymes “claimed” with “same” and “name” and like 5 other words. and look at his facial hair. the under-chin beard? the wispy/stubbly (who knew something could be wispy and stubbly at the same time!)-freshman-in-college-mustache? and his song is about britney spears! and it’s 7 minutes long!

then on the muni i saw a guy with a muscle-t and some sweet faded-out arm tats and backpack with all his possessions. he had a goatee and smelled horrible and was probably about my age.

also he was sort of cute.

which made me realize: justin timberlake is hot BECAUSE he is so trashy. i mean, if he wasn’t jt, he’d be living in a trailer park. he’d be just out of prison for some totally stupid crime like stealing the bumper off his neighbor/father-in-law’s car. aaron and nick carter are trying to work the same thing except that they really are addicted to drugs and totally dysfunctional so they come off a little scary. jt understands that: the idea and possibility of meth are interesting but the actuality of it is disturbing.

and he is working on multiple levels with this white trash 90’s thing. first he has his primary fans. these are the girls aged 9-17 who are too young to remember him with those awful curls in n’sync. these girls REALLY LIKE HIM. they love his music with no caveats. they think his poetry is deep. they think his style is hot.

BUT THEN he also has his meta fans. people my age or older who like his music because COME ON, it’s hilarious that you would write a song telling britney spears that she fucked up. and also. the song’s catchy. and after his 2 saturday night live performances, it turns out he is one of the only starlet types who can make fun of himself in a convincing way. In “dick in a box” he’s dressed up as himself, singing a song that is basically a song he would sing except for the specific “dick in a box” lines of the lyrics. which could be what he is ALWAYS doing, right? i mean, the guy is my age. does he really buy this “girl” shit anymore? i doubt it.

anyway, it’s all very post modern and cool and so stop trying to judge me. he’s hot. i refer you to the country song “trashy women” by confederate railroad. shakespeares of the cowboy crowd. they’ll tell you all you need to know.

in other news: tonight in my fiction class, my teacher took my temperature with a thermometer he had in his pocket. then he drove me home. seeing as my story, which we read this week, was about somewhat inappropriate student/teacher relations (deirdre, i should send you this one), the whole thing might have been dirty. if he weren’t so gay. instead it was really nice. there is something comforting about having an older person take your temperature. i don’t even know the guy but i like it when people seem to care about me. i guess that is one of the pitfalls of being born a human. oh well.