[my boss bought me these sweet flowers on my last day of work.]

i’m in port angeles now. you might have heard of it because it is the most happening place in the universe. there is apparently an epidemic of terrible bangs and friendliness here. for example this guy at the coffee shop i’m currently sitting in (the one coffee shop with wireless in whole town) just gave me these two brownie things he didn’t want to eat. and this is port angeles so it was just him not wanting to waste brownies and i don’t have to worry about poisoning or getting involved in a drug deal or anyone thinking i am now their girlfriend.

also in the last half an hour i have seen four of the worst haircuts ever perpetrated in the state of washington.

anyway. this is what i’ve been doing since thursday:

jade picked me up at the airport. do you know what a code blue is? because we had a code blue at pdx. which means all the security people started yelling “code blue” and everyone past security had to freeze. seriously. code blue is a secret freeze tag move in which all participants are automatically frozen. yell “code blue” next time you go to the airport and see what happens.

thursday night i watched the season finale of the office and grey’s anatomy at jade’s. even though i love jim more than i love any REAL human beings, i am a little worried the office might be about to take a dramatic tumble into irrelevance. maybe they will cancel it after next season. sometimes that has to happen. you know, for art.

obviously this is not an issue with grey’s anatomy. that show is so completely without merit that i’m thinking of starting a spin-off romance novel series called grey’s anatomy: the book(s). no snappy titles if i want it read.

on friday i hung out with mikey and went to the movie waitress. it was a pretty enjoyable movie. happy but not cheesy. good characters. plus it had one of my more serious boyfriends: jeremy sisto (you know, billy, elton, so dreamy in that insane and mean way). friday night pete showed up and we made a bunch of shirts and drank some beer and some of the jack daniel’s i bought for my fiction class but never used.

this was possibly another highlight of my summer. okay, yah technically it isn’t summer yet. but i’m out of school. basically those are the same thing.

saturday pete and i woke up way way too early and went out to alberta street to sell our stuff. 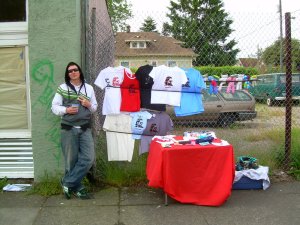 the weather kind of sucked and we made the nearly fatal mistake of not bringing chairs and most people didn’t show up until we had been there for 5 hours already. our sales were minimal. it was a pretty sad time all and all though i got to see a bunch of people i haven’t seen for awhile. my friend mary who i’ve known since probably 5th grade bought a tuff town shirt and a onesie but not for her baby. because she doesn’t have one. 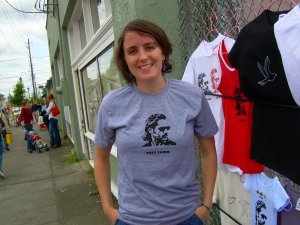 also my friend deirdre bought a change purse and these 2 middle school girls bought 3 stuffed animals. yes, it was a sad day. i think i don’t want to be a street vendor when i grow up. later though pete and i watched brokeback mountain so i had plenty of opportunities to cry about injustice and shattered dreams. i think i like brokeback mountain even more the third time.

sunday i got a ride with pete up to seattle where i met up with my parents. and now i am here. in this epicenter of the cultural earthquake. you should come visit. i know this sweet coffee shop where sometimes people just give you free brownies.