this morning i rode with clare-marie and amira to the alemany farmers’ market: 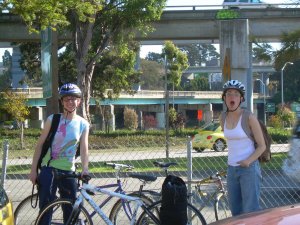 we rode back to the mission afterwards to eat ice cream. the weather was freaking beautiful. IS beautiful. if you can get past the terrifying implications of 80 degrees in november. which i can. i mean, have you SEEN dolores park on a sunny day? have you EATEN the ice cream from bi-rite?

we sat in the park for awhile and looked at the blue sky and the half naked boys. one of them (the people i was with, not the boys) (i know who it is but maybe she wants her identity protected, okay?) said something about sort of wishing she was a boy sometimes. it was more graphic than that actually and a lot funnier. but i totally agreed with her and it reminded me about how lately i’ve been thinking that boys might be my kryptonite. i guess i’ve always sort of wanted to be a boy. have you seen the stuff they do? because it looks like a lot of fun. and it isn’t just the actual activities, either. my parents are very liberal people, concerned with gender neutrality. i mean my brother has a freaking kirsten doll. so i played baseball and went to mikey’s tiger cub meetings and had short hair and climbed trees and played tons of smear the queer (my neighbor’s parents used to make him call it “crazy tackle” and so maybe from now on we should just go with that because i’m pretty sure you aren’t allowed to even think the words “smear the queer” anymore and writing it is making me feel a little bit like a nazi).

but even though i got to do these things, i sucked at them. i played right field my entire baseball career and i don’t think i ever caught a ball and the only hit i got ended in me basically peeing my pants in front of the whole team. and any game that involved me and a football ended up with me face down in the mud. actually, lots of different types of games ended that way for me. wall ball. wimbley. base tag. cricket. wall sits at ski team practice. street fighter. and don’t get me wrong. i LOVE getting thrown into mud. or snow or trash cans or the back of a couch. i mean it. nothing is better. but i’ve always kind of wished i could do boy things like boys do them. without caring. just, you know, awesomely. maybe because i figure then i could be friends with them like they are friends with each other. like everything’s so easy; let’s throw an ax at a tree for an hour and then light off a firework and recite sports statistics and then skateboard down a steep hill and talk about girls and call each other dirty names and our feelings will never be hurt! it seems perfect. the only problem, the thing that has ruined my life probably since 6th grade, is my embarrassing desire to make-out with/marry/have millions of babies with a full 85% of the boys i meet. this is a lethal combination! how can you really be cool with someone calling you names and telling you about all the hot girls they want to bone when secretly you want to be their wife in the girliest,most disgusting way possible? i’ll tell you this: it’s difficult.

and boys don’t really want to make-out with/marry/have millions of babies with girls who they think of as friends i think. mostly they weren’t raised in such open minded households as i was. they want girls to be girls and do girl things with them and boys to be boys and do boy things with them. sex is a girl thing. drinking beer and shooting guns is a boy thing. the only people who get both are ennis and jack from brokeback mountain. which is why if i could pick another type of person to be i would go with outdoorsy gay man. absolutely no question.

so there’s that. and i am happy i have clare-marie and amira to be friends with. i’m pretty glad we never do any manly wrestling. and there is always the 15% of boys i am completely un-attracted to. or the majority of the 85% who i stop wanting to marry about one week into our friendship. though i sort of stop wanting to build rafts and paint a bunch of stuff black with them then too. which is always very disappointing.

anyway, after we sat in the park for awhile i rode back with clare-marie in our direction and then decided to keep riding. i turned around and took the wiggle up to golden gate park to park presidio and then down past crissy field and the marina, back on embarcadero and then market and then valencia to my street. it was nice ride. a lot of boys rode by me. at one point i followed a very awesome looking bike gang through an intersection and almost got killed. kryptonite. if you want me to do something, i suggest getting a boy to ask. he doesn’t even have to be tall! please don’t give this information out to the bad guys.