last night at around 2 am (so i guess that’s this morning but whatever) some dude smashed his car into the stop sign across from my window and knocked over two of those big greenish storage mailboxes and ended up plowed into the car parked next to them. it made a very loud noise, you can imagine. and even though it was raining, there were plenty of people around to drunkenly yell, “i’m a doctor! is anyone hurt?!” the passenger of the car was VERY upset. she ran down the street weaving around screaming. i don’t think they spoke english and when the driver finally corralled his passenger (possibly his date; they looked like they were on a date), they tried to drive away. someone stopped them and so instead they left on foot about 2 minutes before the police arrived. it was all very dramatic. we are speculating that they were drunk or illegal or both. it’s all happening on my corner, i’m telling you.

here are some crap pictures of the event. i’m not sure what the ethics are of photographing disaster but they are really horrible pictures so that must count for something: 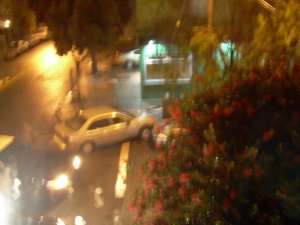 [this is after the police pushed the mailboxes back up. the stop sign is still down though so be careful!] 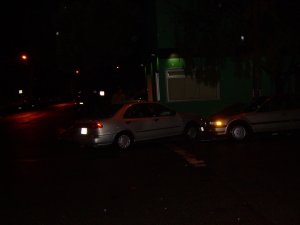 i got my legs waxed today and it was awesome. if you live in san francisco, get your legs waxed at habit. it is completely the best place i’ve ever gone; both of the girls who work there are hardcore waxing rock stars. it’s like, talk shit about marina people with this cool girl for an hour and when you are done you won’t have any hair you don’t want left and you won’t even know what happened. least painful, most entertaining of all waxing places in the universe. and i love wax on in portland with my whole heart. in case you were wondering about that. which is by the way, quite possibly the gayest shit i’ve ever written.

and by “gay” i mean: you know what i mean. i’m not trying to slur anyone. i’m being ironic. leave me alone. i’m like the gayest straight person in the whole town.

which brings up an important question. i mean, i’m totally against using “gay” as a super negative all the time. i gave a guy i worked with this summer a really hard time for calling everything he thought was stupid gay all the time. i told him it made him look like an asshole. but just 2 paragraphs ago i realized that the ONLY word i wanted to use to describe my weird, girly gushing about leg waxing places was “gay.” that “gay” was in fact the perfect word to describe what i was doing. why? why didn’t i just erase the paragraph? not like any of this was pertinent to well, anything.

this evening i ran into clare-marie and her boyfriend at whiz burger and then, as i was leaving, a 13-year-old boy made some weird kissing noise at me and said, “you have a big ass.” i gave him the most i-am-completely-amazed-that-someone-as-stupid-as-you-didn’t-somehow-die-on-the-way-to-school look i could. i couldn’t tell if he was complimenting me or harassing me. i guess it was just your average adorable early experiment in objectifying women. so cute. i should have punched him the face. even if he was trying to be nice.

in other news: i’m getting a lot better at facebook scrabulous and one of these days deirdre is going to be sorry she ever showed me that “qi” was a word.