i just watched vh1’s top 100 songs of the 90’s. like the whole thing i think. by the end i knew what was going on. though no one else was around to hear it, i totally called “smells like teen spirit” as the number 1 song of the 90’s. according to vh1. i think i also called whitney houston and rem being in the top 10. but seeing kurt cobain reminded me: i’ve been watching too much tv. i had a dream last night that i was making out with jordan catalano. who is a fictional character. but looks like a softer kurt cobain. here are those dream boat dudes i would have loved in middle school if i had a tv, and so, a bit delayed, kind of want to put up pictures of on my walls. one: not real. the other: dead. 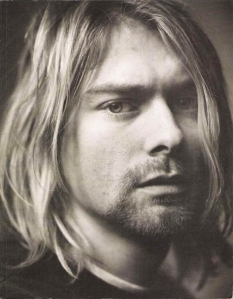 you know what song number 3 was? “big butts”. that’s kind of a travesty if you ask me. where was elliott smith? where was ben folds five? and really, what is so freaking mind-blowing about u2?

though i have to say i am still standing by eminem because he is a genius. and so is dr. dre apparently. they never mention it really but dr. dre is in like every other video they showed. i think i am going to put “california love” on repeat the whole trip to washington on sunday. i really IDENTIFY with tupac.