to cut out the suspense: no problem, i passed my driver’s test with only two wrong answers. one was something about laws about putting dogs in the back of pickup trucks. not super applicable to my life. and the other was, i don’t remember.

of course it wasn’t so easy as go to the dmv and renounce your allegiance to oregon. instead it was go to the dmv, a forty-five minute multi-bus trip that involves twenty minutes squeezed up against a toothless prostitute, arrive in time for your appointment, only to have the lady behind the desk ask for your birth certificate or passport. i swear to you that it doesn’t say that you need those things on the website. i mean, they seem like reasonable documents to want, it just DOESN’T ASK FOR THEM. i looked at it a million times. so i didn’t have them. so i had to go all the way home to get my passport. upside: i also picked up my umbrella which was useful when it started raining like the end of times. downside: to punish me for turning my back on my native state, the wind ultimately snapped my umbrella into two pieces.

now i need a new umbrella.

after successfully becoming a californian (just in time to REALLY UNDERSTAND tonight’s debate), i used my amc gift certificate to go watch 27 dresses. there is no excuse for that behavior, i know. don’t see it. i don’t want you to imagine me there, in the theater, confused about why james marsden was apparently given an uncool frat boy instead of a stylist and what the deal is with katherine hiegl’s devotion to the cause of getting all american girls to feel like the answer to everything is marriage. i wouldn’t be surprised if she convinces the “writers” (monkey robots) of grey’s anatomy to write izzy getting married to george as a way to solve his small being gay problem.

not that i watch either of those shows. i’m just saying.

anyway, i came home,wet, umbrella-less and hungry. sad too because i got that umbrella in scotland like four years ago and it was sort of heartbreaking to have to toss it into a mission garbage can. interesting though, as i may have been the first ever person to use one of those trash cans instead of the much handier sidewalk.

for dinner i made myself an open-faced chicken and avocado sandwich and steamed broccoli and squash with some home-made cheese sauce. i am in fact a culinary whiz. my ego may be inflated because my roommates are seemingly transported to france every time i use more than one pot.

i was supposed to go meet up with my friend marisa tonight but we’ve postponed it due to my new californian attitude about the rain. which is: it is far too wet.

so now i’m into sunshine and golden bears. it’s a whole new me, i’m telling you. except of course, for this: 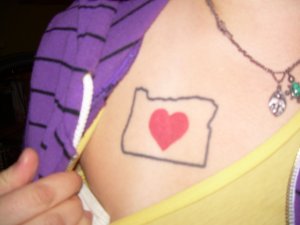 oh well. who am i kidding? i love rain. and golden bears look like babies up next to a beaver.

lost is on tonight, finally. WHAT IS GOING TO HAPPEN? more importantly, how bad will it suck?