i used to say nonsense shit all the time, all self-congratulatory, about how i didn’t ever get stressed out ever. i think i said that because when i thought of “stress” i immediately thought “cathy” and since i am not middle aged or in the market for a swim suit, i assumed i was never stressed out.

i think i am though. a little stressed. right now. because when the little teenage girl working the counter at 24 hour fitness told me they were out of towels, i almost yelled at her. i raised my voice. which i don’t do to strangers, even when they are screaming obscenities in my ear. and then when this bartender last night was so snide with me last night just because i wanted to know how long my lentil soup was going to take so i could go down and listen to the music and then come back (“you just ordered it, geeze, it’s going to be a little while”), i nearly snatched my dollar tip off the counter.

when i looked at my new driver’s license today and saw they had GOTTEN MY BIRTHDAY WRONG (yes they send it in the mail so i was unable to see the mistake at the dmv) even though they scanned my passport and saw my old license and i’m sure i wrote it out for them, i sighed heavily. things are getting to me. the man on the phone said i have to come back in to have it fixed. i was just in there twice. dear dmv, ARE YOU FUCKING KIDDING ME?

plus of course, a lot of school and work and reading things and creating things and i realize the more i think about it that i am fucking freaked about jessie having cancer. it’s wrong. it makes no sense.

actually this is the main thing that is bothering me but it’s hard kind of bothering to explain. it is easier to want to murder random members of the service industry and to drink a bottle of dead guy while watching firefly. two sunny points in the cloudy dark: dead guy at a convenience store down the street and firefly.

here is me. in case you forgot what i look like in pictures i take of myself. i wear the same sweatshirt everyday. there is bike grease on my forehead. 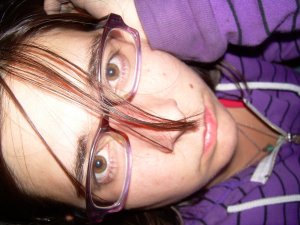 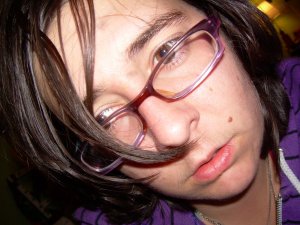