the past few days have been pretty gray in what seems to be an attempt by the weather to make it easy for me to set the scene for various disappointments in a sort of jane eyre style way.

first i got rejected from this camp job after two interviews. apparently (i discovered after a three minute monologue by some girl with a name like stefani on the phone which included the statement “we loved your energy” though i have no memory of a girl named stefani) i’m “just not a good fit.” i’m not sure what led them to this conclusion since i didn’t ask. but my speculations are: a) someone was disturbed by my 10 minutes discussion on the state of literacy education (this is all i talk about now, sorry in advance) while i waited for my one on one interview (after a horrifying group interview) at like 9:15 pm in some far off building on campus (cruel to have an interview this late and what do you expect?) b) they googled “lizzy acker” (i give up/that is in fact my real name) c) they realized that i was not planning to become an elementary school teacher or d) they noticed i wasn’t a bubble sorority girl riding the fake happy train all the way to self mutilation and an eating disorder.

second, just a little bit ago, i got another rejection that i would have been able to discuss if i hadn’t been rejected but now must keep secret until i am not rejected by someone else. cryptic i know. let’s just say something really cool didn’t happen to me. the usual.

but there are bright spots. like my lawyer getting me as much money as possible which i might get by next week or the week after and my dramatic monologue being read by this man at the Browning Society Tea: 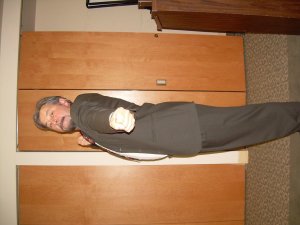 so here is the poem, my big money maker (i won $50 for this), my historical opus:

A lot to ask

To let me shoot this apple

Sitting on your head.

You remember the neighbors,

How he made them choose between

Because they didn’t bow

Better you learn that now.

And he loves entertainment.

This is your old

I’ve been shooting this crossbow

You know, my boy, that I am

The second best marksman in

And the Vogt couldn’t use

He is too good.

It’s all a publicity stunt Kiddo.

Not to worry, chin up.

Well, not too far up.

In a moment, you will be eating

Sliced apple out of your hair.

It is a style choice,

One arrow is all I need

To amuse the Vogt

And set us free.

The Vogt has arrived.

And make sure you don’t move.

It will be over in a moment.

and here is me as walter and dennis (the awesome man who read my piece, very dramatically) as william: 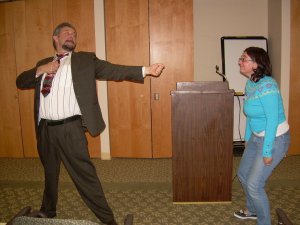 also in the past two day i wrote three stories. they might suck though. i have no idea.