friday night pete got free theater tickets on craigs list. he is all about free stuff on craigs list and i support that. so far we have received for free:

craigs list free is pretty sweet. i recommend looking into it, especially if you live in sf. i don’t know if in other places people are as serious about their commitment to craigs list and freedom as the citizens of this city are.

anyway, so we got dressed up for the play because it seemed like an awesome thing to do. this was my cutting edge outfit, the dress i bought for my cousin’s wedding even after i knew it wasn’t actually happening: 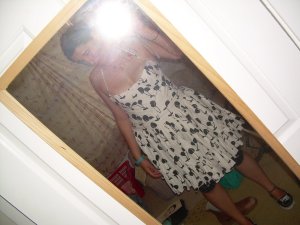 pete wore a super fabulous hat, which i should have taken a picture of. we looked very finger-on-the-pulse and big city. of course, when we got to the theater, there were only about 25 people, 20 of whom we assumed were from craigs list, and no one else was dressed up. and then the play started. it was a theatrical adaptation of stephen king’s misery. i’ve seen a lot of plays, which i tried to use to make pete feel better about theater in general after we sat through nearly 2 hours of the most miserable crap i have ever seen in my life. i mean it should be scary when someone attacks another person with an ax, not just another painful reminder that the play isn’t over yet. but i’ve seen a lot of plays. and there are good ones and bad ones and the plays put on in public schools. this was the worst i have ever seen, including all the plays i was ever in, including girl scout camp campfire skits. it was awful. please don’t go, even for free.

last night we went out in the mission like real 25 year olds. we met up with pete’s new friend at a very happening bar in the neighborhood called the homestead (so adorably old-timey yet so urban!). then we convinced these kids we were going to a live sex show but instead spent a couple hours smoking a hookah in the front window of the pork store and watching the hipster parade on 16th between mission valencia.

i still want to go to a live sex show.

this morning pete told me that he had a dream last night that i was being really mean to him. what’s disconcerting about this is that when jade was visiting she had a dream i was being mean to her and then there is my brother who seems to only have dreams in which i am being mean to him. those being 3 of my favorite people ever, i wonder if i have a problem. pete told me, a little unconvincingly, that i’m not really that mean. i think maybe he is just trying to avoid an altercation or something. it’s sad. maybe i am just a world-class jerk and that is why people have dreams where i am mean to them. i am bossy; i know that. and pretty sure i am right basically all the time. but i mean, look it upon the internet, i usually am right. no one ever has nice dreams about me at ALL. i have nice dreams about people: like last night i had a dream where i was at this fancy hotel and pete was coming and i kept telling everyone how awesome he was and then later he got there and helped me avoid stepping on a homeless guy in woods by yelling “hobo!”

also part of the time he looked like a mix between my boss at the pool and kirk cameron.

there were a bunch of transsexuals at the hotel.

the next door neighbors are crazy partying and it is like noon. i think a good number of the units in our building are bachelor pads. like 5 to 8 dudes sharing 2 bedrooms and one bath. it’s kind of nuts. they like to play music loudly and wrestle each other. at least i imagine those thumping sounds come from powerful take downs. what else would they be?

well, i think i might take a nap. sunday is my only day off so i really have to milk it as much as possible. plus we stayed out until maybe 3 last night. dang. yeah. i am going to sleep, right now, on the purple couch.