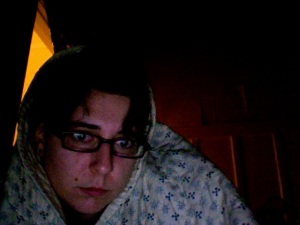 pete and i just finally finished watch this week’s bachelor. every week he says he’s over it but he keeps on coming back.

that show is what’s wrong with america, in so many ways. but it’s sort of like, what isn’t? all i do now is watch train wrecks in progress. it’s 2010 and the world is falling apart. luckily, the end will be fully entertaining.

i am going to the east coast next week and my plans involve driving so: snow, stop falling down!

the problem with making brownies is that i want to eat them. i made some delicious brownies on sunday. i guess it is a partial victory that some of them still exist in brownie form.

my sickness is almost gone, though yesterday i tried to do yoga but left because i couldn’t breath. and i had a million things to do. i don’t know which was the real reason.

anyway, i need to get my bangs cut and more importantly, tomorrow is pay day. i feel like buying clothes but what i should really do is pledge to kqed.

everyone should pledge to kqed.

i wonder if the trade off for being really successful is a miserable life. have i mentioned that i want to live on a farm? on the beach?

is there land for sale in hawaii?

okay, enough already. is google buzz just ONE MORE THING TO WORRY ABOUT?

the answer to that question is: yes.