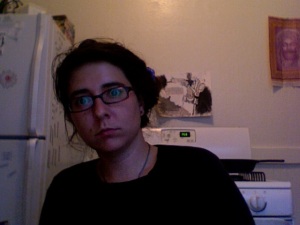 i know i’ve said this before but i can seriously not wait for august to be over and then for 2010 to be over and for me to be over this MALAISE.  at least i fell asleep last night, which is more than i can say for the rest of the week.  and i woke up feeling happy this morning which is nice and unusual.  i don’t remember why i was happy but the feeling didn’t last for too too long.  but still.  it existed.  and actually usually, day by day i feel better.  my mom says that it is okay to sort of lean into sadness and just go for it.  though she also says that if i get into a sadness hole i should get professional help.  i know that LOTS of people get professional help because life is hard and all the crazy shit we have does not make it any easier, but i think i am okay for now, just owning it.  i think i finally fell asleep last night when it occurred to me that all my trying-to-figure-out-what-happened-and-what’s-going-to-happen mind working was totally useless.  that all my brain was doing was trying to put together the same pieces of random information and make them make sense.  that my problem was believing that anything inherently has to make sense.  i know that isn’t true.  nothing makes sense.  if there is one thing i learn over and over and over again it is NOTHING MAKES SENSE.

when you are happy it is great that nothing makes sense.  i mean, honestly, i spent the last year and a half or so, probably before april, just basking in the total nonsense of having someone i love love me back.  how did that happen?  how was that even possible?  and now that the nonsense is sort of reversed, you know, the person i love left me, well, i am struggling against it because i want it to make sense.  that’s what brains do.  it’s just futile.  i mean, not completely, we have to put things in some order in our brains so we can walk around and make dinner and stuff like that.  but expecting perfect logic is asking for disappointment.

everything is just a theory anyway.  most of the things that happen to me come as a complete surprise so i try not to have expectations.  it’s impossible but it’s worth a try.  i took all of pete’s stuff off the fridge and put it in an envelope.  i don’t know what i will do with it yet.

tomorrow i am going to see my cousin and her amazing and hilarious children.  i think that will make me feel even better.  it is good to know that there are some permanent people in your life.  i mean, nothing is permanent and no one lasts forever but at least there are people who love you no matter what stupid thing you do, even the pregnancy april fool’s joke i pulled on her back when i was in college.  that was mean and she still loves me.

the person staying with me for the next little bit started moving his stuff in today.  he seems like a really nice guy and it is good to have another human in the apartment to shame you into eating meals and maybe even eating meals at the table.  i need to get this place in order but first i am going to watch a little more mad men.  i’m tired.  tomorrow i will get up early and go to yoga and then i will go spend the next few days with the cousins in a hot location known as stockton where we will no doubt take my shark tattoo out for its first swim.

thanks for listening.  i guess i believe in order somewhat if i keep writing and ordering my thoughts like this.  it helps.  i hope it isn’t too boring.  i hope it doesn’t ruin my chances too much at future employment.  also, if you like awesome things and especially awesome music, check this out.  it’s my uncle’s band playing music in 1969.  for some reason, it makes me feel happy.  however, it is very sad.