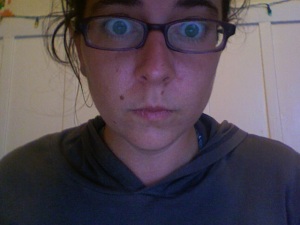 i’m tired.  i just spent three nights in a row hanging out with friends, drinking and talking.  it’s like old times kind of, but with less drinking.  two of the nights were actually spent hanging out with my new friend/temp roommate michael who turns out to basically be the awesomest.  like i once told jessie after she commented that i don’t like most girls, i don’t like most people, so it is lucky and magically that this random person living with me turns out to be one of those few people.  or maybe i have just taken the wrong attitude towards people for all these years.

anyway, we stayed up too late last night, discussing many important topics like the internet, music, dave eggers, violent crimes, foreign countries, organized sports.  we share many common interests.  but now i am tired,  though i did managed to get to yoga this morning and have already done some grocery shopping and almost finished my laundry.  i am sort of stressed about what i should read tonight at bang out.  i thought i knew what i was going to read but i am having second thoughts.  they want something from the book and so now i am thinking of three short and exceptionally weird pieces though that won’t give a great feel for the book which has a lot of realistic things going on in it.  plus, do people hate science fiction on principle?  are they over the end of the world?  and i don’t know what i am going to wear.  i think i might wear this one skirt i have with a broken zipper and just sew myself in.  that might be strange but it is a cute skirt!

maybe i should try to take a disco nap.

opinions on these question are welcomed.  i am thinking of scrapping all other birthday requests and just asking for a new mattress.  if you live in the bay, come to the reading tonight!  i will see you there!  i will wear make-up!