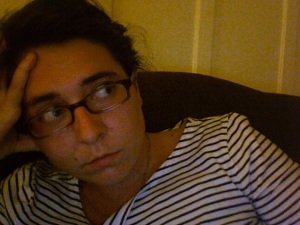 my roommate showed this to me the other night. i like this song and this cover is even better because it is by a swede named jose gonzalez. i wonder what his young life was like. he was either really popular or a total outcast. in those situations it only goes extreme.

my friend meghann from middle school came into town last night and jade and her and i went to el metate for dinner where the owner finally asked me why he hadn’t seen my boyfriend in such a long time. maybe that means i go there too much? that they know all the business of my personal life? but i love the owner guy and he told me, “everything happens for a reason” and then jade said, “that’s what i’ve been telling her!” and i wish i had said some funny reason that this might have happened. i didn’t have anything funny to say though so it ended on sort of a sad note.

i don’t really think everything happens for a reason, by the way. i think things happen and our brains give them some order so we can continue to go on eating meals and smiling at people at work. but “reason” implies some sort of major brain behind the whole situation and i just can’t get with that. i assume that everyone is as stupid/smart as i am, including god. i think that might be blasphemy and either way it’s a weird thing to say since i don’t really believe in god. i just think that the forces that work outside of us not REASONING forces. they are more like balancing forces but not in like a small human scale balance like in the sense that if we fuck up the earth completely some day we will be gone and it won’t matter and then the sun will explode.  and that will happen anyway.

i fully agree that i am not making sense.  and i know people are trying to be nice when they say “everything happens for a reason” and i know that the sentiment is basically right, that in a few years i’ll be like, thank GOD that happened, but still, i’m tired.  i haven’t been surfing in months and months.  i need to make that happen.

tonight is a night for sad songs so here is another one.