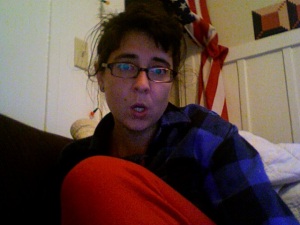 last night i went out with some friends from state.  it was a pretty fun time, so fun that after 1.2 drinks i pulled my pants down in the booth so everyone could see my tattoo.  i am the most classy of all the people.  after that adventure i went to meet up with jade and some portland visitors.  i was about halfway between the places when i reached into my pocket and discovered all my money, thirty two hard-earned dollars, was gone.  congratulations self.  get me one drink and i take off my pants.  two drinks and i lose all my money.  four drinks and i would probably wake-up with my head shaved in the cargo hold of an airplane in thailand.  watch out.

anyway, i had a pretty good time, even with the financial mishap.  what goes around comes around anyway and i bet that $32 made someone’s night.  i’ve had windfalls before–i found an unclaimed twenty once in an atm–and at least i didn’t get arrested for indecent exposure.

it’s a terrible movie.  there is nonsense voice-over at the beginning and the end that repeats the idea that “people are always rushing around, maybe that’s why it’s called the human race” which makes me almost vomit just to write and seriously has NOTHING to do with the movie.  not one thing.  maybe you are supposed to think that jason bateman’s character is too busy for love?  no, i am pretty sure he’s just a baby.

but even though it sucked and was completely divorced from reality, jason bateman sort of stole the show with his jason bateman–ness.  he isn’t an actor.  he is just an extremely like-able and photogenic guy.  jennifer aniston was not on screen as much as him, which was another bonus.  and there was also the adorable-ness of the little boy.  he was perfectly deadpan the whole time.  i want to buy that kid.  that would be some good merchandising.

after the movie i walked from downtown to dolores park to meet up with jade and the portlanders.  it feels like fall in oregon today.  sunny, brisk.  i ate a cheeseburger which was pretty great.  and now i am going to research mattresses.  what kind should i get?  i am oddly stoked about this mattress thing.  i guess i am a girl.  quick, somebody make a romantic comedy about this!  holy shit i am tired.